I went to a skillsmatter session last night, and a great one it was too! 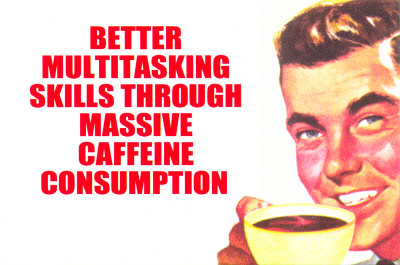 Coffee, the hidden key for multitasking?

All about how to “multitask” and “context switch” in an Agile manner (NOT!).

Greg Gigon dismissed the myth of multitasking (well at least for the male) by highlighting that just because computers can do it, with their multiple cores, we only really have one, albeit large mysterious and internally unknown and so we cant really multitask. Greg supported this with various statistics about how trying on two tasks at once inevitably takes longer than if you did one at a time.
The key phrase for me was “attention rich”, quoting biologist Dr. John Medina “We are biologically incapable of processing attention rich inputs simultaneously”.

Take reading this picture for example: 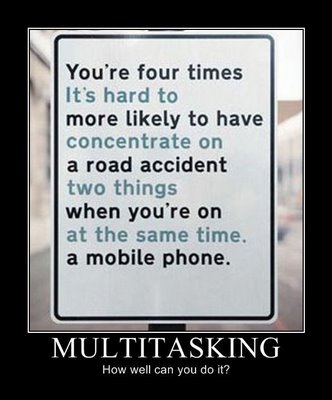 This multitasking is not a new problem. But it has been recently exacerbated by the role that media and pcs, phones, twitter, facebook etc.. have taken in our lives.

Not a new problem at all; In fact 100’s of years ago Lord Chesterfield said:
“There is time enough for everything in the course of the day if you do but one thing at once; but there is not time enough in the year if you will do two things at a time.”

So what’s this got to do with me?

Well Greg led us on to talk about how we can AVOID multitasking in our daily working lives. The biggest one he talked about was removing interruptions.

Interruptions comprise of but are not limited to the following:
Facebook,
email,
twitter,
meetings,
colleagues needing help,
blockers in your own work,
phone calls etc…

Often the problem is also us, in that we interrupt other people from working because of our own problems.

So how do we fix this?

Greg suggested a number of answers, including:

Pomodoro technique – (see Gregs blog at the bottom for details on that) its essentially a time focus technique, working with the natural ability of the brain to focus on tasks for short periods of time.

Kanban helps limit the number of tasks people are working on.

Also music, that is “familiar music”, can help people tune out and focus on what they are doing, this is contrary to what I believed at the time, but it does make sense. I personally cannot concentrate well listening to music, but if its music I know well apparently the brain processes it differently and acts as a wall against other background interruptions. This will obviously not work for new music or radio.
I’ll admit that when I have worked listening to music its because I am doing mundane work or less brain intensive work (think documentation).

I might also add a couple of my own ideas and one is where you simply have a todo list, visible and in front of you. My personality is that I like to achieve things, and I feel like I have been rewarded if I can strike things off my list of things to do! I am also in the process of using my very own task board, this makes what I am doing very public, and transparent, and therefore will also help me keep focused during the day. manage people’s ability to be interrupted.

Another idea is to manage interruptions using visible signs (ie. headphones on head means stay away) or even messaging statuses. You could also make a couple of programmers available for contact and by implication the other programmers are not available to people like the business. Obviously getting the balance right is important.

For a far better description of these principles please visit here:

this is good too on multitasking!
http://blogs.saschina.org/bknowles/2009/09/30/multitasking-a-human-delusion/

This entry was posted in multitasking. Bookmark the permalink.