It was time for the race.  Having received a wholly encouraging tweet from none other than Denise Lewis (Olympic heptathlon Gold Medalist, OBE etc..) starstruck I excitedly dismissed my calf tape from my leg (no pain) and tried to sleep, but my heart was running like a car engine idling too high.  Sleep was difficult.

Arriving at Greenwich Park and the Start

I waved and hugged goodbye to my wife and daughter in the light drizzle of Greenwich park, a whole hour and a half early and started to mingle with the other runners.  Thousands of people, different causes, different nations one race.

As we close in to the start time, there are large queues to the toilets (tip – tactical poo at home) and more manageable ones to the men’s urinals. Sorry ladies, for wees you are on your own here, I did notice several ladies found a friend to create a makeshift tent/barrier so they could squat, bit nasty but ho hum.

We then got sorted into our starting pens like cohorts of soldiers based on our predicted times, and it got a bit warmer and nicer.  The jumpers and bin liners started to get discarded (I heard the jumpers get sent to charity shops) and people started to get excited. 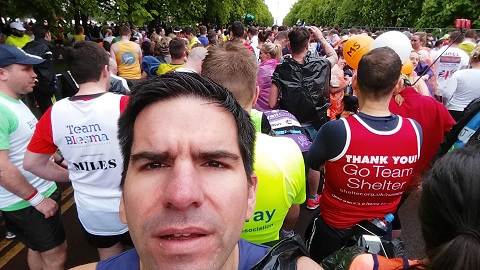 the cohorts of runners penned in at the start

We then started to shuffle forwards, I was in pen 8, and soon we went past the other pens and the start was in sight.  We went over the mats and through the big red start gate. The crowds were there already, shouting peoples names and encouraging us on, we were giving high fives out to the kids and there was an incredibly buoyant atmosphere.  About half a mile in, my calf injury recurred.   When in training I then stop, but while quite painful, (think like a mild cramp or pull) I decided to keep going, after all if its going to fully go, its going to have to fully go, and why not test it with another 25.7 miles even if the maximum number of miles I have ever run at once is 18….  :S In the period of approximately 200 mins, I went from frustration, rage, blaming (physios/masseuse/self/others), denial, praying in tongues, and then calm acceptance.  I took my foot off the gas and settled to what seemed to be a steady pace.

An ironic cheer when through the crowd as we passed under the first mile!   I had seemed to be stuck in a fairly slow pack of people who surely were not running at the 4.30 or under pace I started in.   However that suited me down to the ground given my calf status of painful.  Mile 1 became 2, then 3 and 4 and I realised my painful calf had seemingly stabilized.   I was limping but it wasn’t getting any worse, I managed to compartmentalise the pain and try to forget about it.  It was around that time that I heard some loud karaoke music going on, except I couldn’t see where it was coming from, none of the houses had speakers in the windows in this particular stretch and then I realised it was moving with us.  It was none other than Graham Burns (Twitter @KaraokeMarathon) carrying a portable karaoke set.  I immediately recognised him from last year when I was watching my sister in law run.  I think it was “my my my Delilah” (which fittingly is a murder ballad) and on the chorus all the runners in the immediate vicinity belted out the lyrics myself included.  Suddenly my spirits were lifted and my calf pain was just a detail, if I can keep up with him and the calf holds out structurally then its going to be a fun run.  One of my fellow Sparks runners came up and said hello before disappearing off into the distance, always nice to see a comrade.

Even limp/running though I managed to progress past Graham and then I found what I consider to be hands down the greatest thing I have seen run a marathon.  A dinosaur. 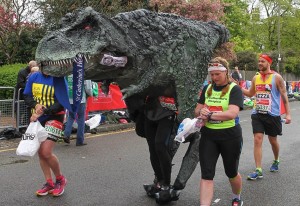 you’ve got to love this

The most impressive thing (apart from the fact that it looks like it had escaped from the set of the film “Jurassic Park”), was the leg movement as it was attached to the runners legs, it was the best marathon related fancy dress thing I have seen so far so please give here: https://www.justgiving.com/bates44/.

Not long after that, I overtook a giant pair of testicles. Like these below and its actually this guy: https://twitter.com/mrtesticles 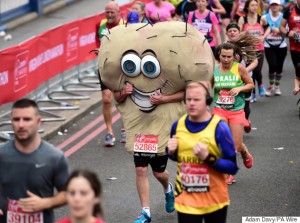 this is nuts, don’t forget to check yourselves guys!

Less than an hour later we were around the Cutty Sark where I got my first excited glimpse of my family and then on to Tower Bridge.  The minutes flew by and I remember seeing 10 miles go past feeling very fresh. 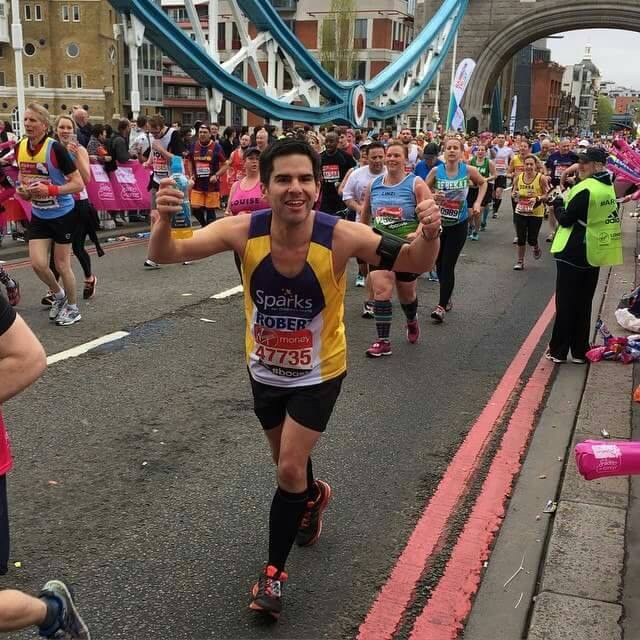 I am hugely psyched up right now

Not long after that we get to the halfway line, Mile 13.  Music abounds and there is encouragement from all sides, we have already seen the super fit club runners running in the opposite direction, with their serious super focused faces on.

Occasionally I would see a runner who had a worse complaint than me, hobbling painfully, but I had managed some kind of rocking motion within which to manage my calf that seemed to be working.  The “speed limiter” that was my calf enabled me to conserve my energy and it was around mile 16 that was my fastest mile (least slow?) as I was shuffling around the course.    I saw more friends and even overtook a clown whom I had a selfie with at the start, I even overtook Jesus who was carrying his cross, (barefoot … I later found out).  I managed some banter with the crowd too, “hey guys come on you can do this too, its EASSSY” with a response of nervous laughter. Although I wasn’t saying it 10K later. 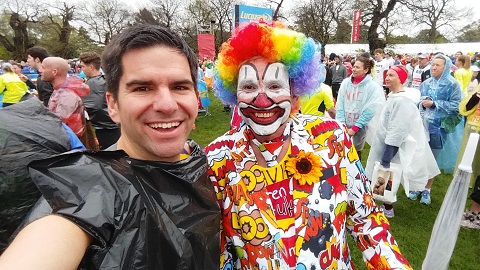 The whole canary wharf area was difficult. I hit and passed mile 18 and mentally thought, its ok its just one little 8 mile run from work to around Victoria park now.  However the body began to feel quite sick and the head began to nod a bit.   I saw my family again at mile 21 for another gel. 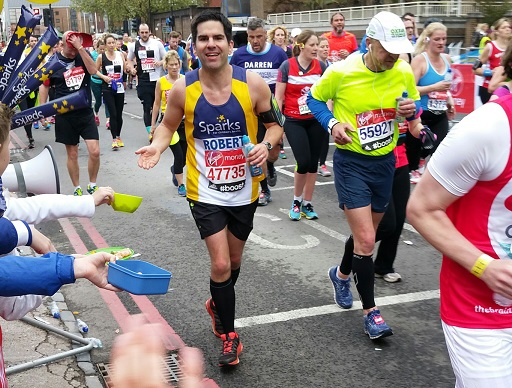 look at all those sweeties on offer! mile 21/22 Sparks Cheering station, I seem paler

I am beginning to think about walking now, I know where I am and I know its not too far, but I cannot walk, if I walk my calf might freeze up like it did after just one mile a week ago.  Additionally what if I couldn’t start again.    I am also feeling a little sick at this point, I have had 2 litres of lucozade sport already and 5 Caffeinated Viper gels at this point (* Viper does say something like Max 3 per day), I might add that I am a seasoned coffee drinker so Caffeine is not really an issue.   Everything was starting to be a bit sickly sweet.  After mile 22 my quads on my left leg almost spasmed and cramped up, it was doing all the hard work for my calf, so I needed to slow up and walk, upon which I grabbed two jelly babies offered by a stranger.  400 yards later with a growl I managed to get running again until the muscle cramped up again.  I did this routine a couple of times before the final push.

When you slow down, you go to the side, its there where most of the encouragement happens, people really encouraging you on.  I’d just like to say thanks to those people! Although I was mentally already there, and I think we all were, when you’ve run 25 miles there’s no way you are going to want to stop before the end.

Finally onto the last stretch its great, I tried holding hands with a burly chap but he was having none of it and then it was all over. 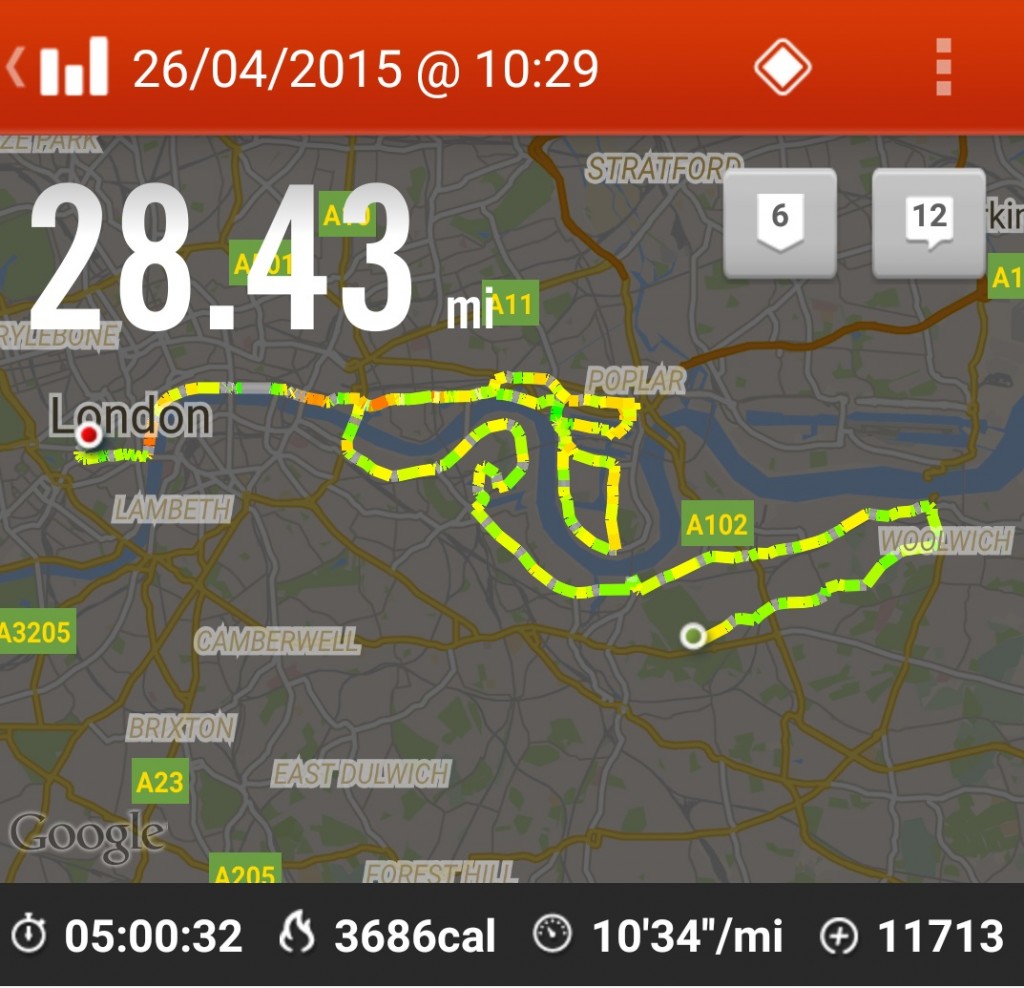 A helper placed a medal around my neck and someone kindly wrapped me in foil to wait for my family to arrive amid the chaotic aftermath.  Its a very long walk to get your bags back when you’ve just run 26.2, but I was in NO HURRY hahaha.  It took me about an hour to get down to the Sparks meeting point in the end where I managed a shower, quick massage and a bite to eat before heading off home. 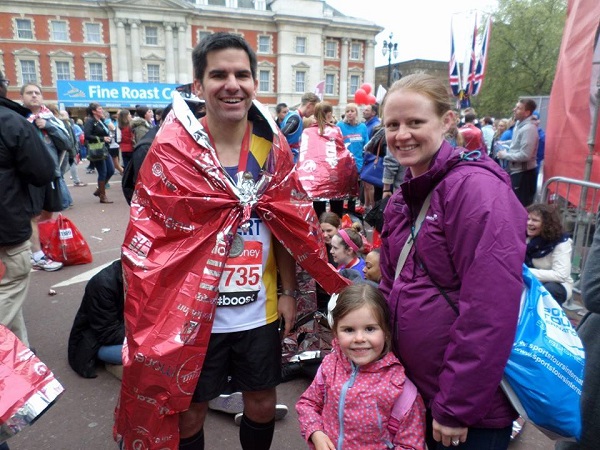 quick family pic at the end 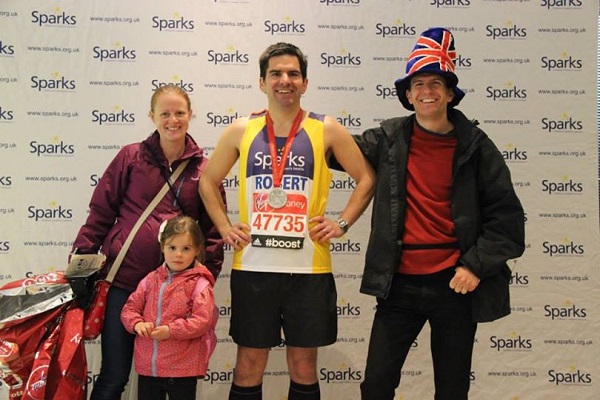 And there we have it.  Finish time was 4H 59 mins and 38 seconds which is pretty good for a limper.  I’d quite like to know what an injury free one feels like, but really enjoyed the challenge of this one, knowing what you can push your body to under its own objections.

In summary – If I can do it you can do it

If I can do it (even on a calf strain for 25 miles), and if you don’t have any significant medical conditions and you are basically healthy then you can DEFINITELY do it. If not you can still probably do it, but I am aiming this at the average overweight-never-run-more-than-4-miles-before person.

What you will need to do, is train, training is a commitment, but its not really that hard, more time than effort, it ramps up gently, your first serious run might be a 5 miler, but not before you’ve done a 1 miler, a 2 miler and a 3 miler.    You might only be able to run for 2-3 mins before stopping.  That’s where you start from.  You don’t even need to really start until Novemberish.

If you still dont think so simply read the first paragraph of my first post on the subject here.  Huge thanks to Sparks charity for this opportunity, Sparks are a superb children’s charity researching and helping the very young! Please give here http://uk.virginmoneygiving.com/robertelbourn .