we need to talk about technical debt 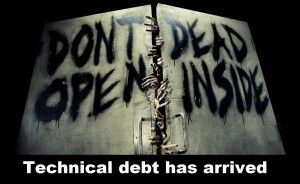 just as you thought it was delivered, done and dead….

Technical debt is quite a big topic and not equally understood, especially in planning and business discussions , this blog post is an attempt to tease out some strands of truth of technical debt. Having had the privilege of working with a DevOps team it has currently been top of mind for a while.

The term “Technical Debt” is commonly attributed to Ward Cunningham (https://en.wikipedia.org/wiki/Ward_Cunningham) and it is a metaphor for a financial debt:

You need some money, you borrow it, you pay it back with interest.

or is it?  These days borrowing money is not so simple.

You need some money, you then get credit rated, you get investigated based on your ability to repay that debt, and then the funds are released, if you don’t pay back the debt then trouble happens, oh and there is interest, which means the financial importance of what you do now must exceed the importance of what you might want to be doing later.

In the same way.. technical debt.. is not so simple.  Most people agree its something you incur at the short term, for a short term gain, at the expense of a longer term cost.

Lets take the example above and metaphorically break it down.

You need some money (you have a deadline), you then get credit rated (the technical architect is alarmed), you get investigated based on your ability to repay that debt, (you know the code is dirty but we have a deadline) and then the funds are released (the project manager forces it through with much protesting from everyone else), if you don’t pay back the debt then trouble happens (the next release is harder), oh and there is interest (we need bug fixes), which means the financial importance of what you do now must exceed the importance of what you might want to be doing later.

Some people have suggested technical debt is a calculated choice not as a result of messy code.. ie Uncle Bob (https://sites.google.com/site/unclebobconsultingllc/a-mess-is-not-a-technical-debt ). I think its a good thing to read this to distinguish between intentional tactical direction and sloppy code, however unless they are throwaway bits of code, they both amount up to pain in dealing with it later, and if someone has to pay it, its debt.

Another way of viewing it is by looking at different types of debt:

My current view is this:

Technical debt, is the negative effect of producing a deliverable which results in:

What are its causes:

How do you fix this

Given my descriptions above, technical debt is actually an unavoidable byproduct of software development, where there are real people with real deadlines.   Just as humans have natural (waste) byproducts, it doesn’t mean we need to stink of them.  We simply need a system to deal with them, a regular cleaning schedule perhaps.

Moving back to the metaphor of paying off Debt, the answers are simple.

This entry was posted in behavioural change, Core Agile, getting into production, team. Bookmark the permalink.