Shuffled past the 200 mark.  And run   no.. 219 miles. I have done my first, second, third and fourth half marathon!!! Yippee what an exciting time.  Its all about the long runs now.  The long runs are the marathon “dress rehearsals” and its where I am rapidly taking repeat lessons on fueling, pacing and what my body can and can not do.

Don’t ever ever ever forget the nipple plasters, that is FABRIC plasters, NO OTHER KIND.  This is the reason why: 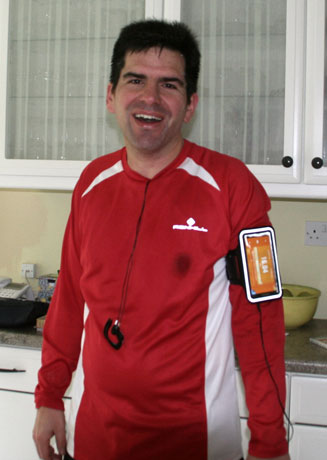 that’s not sweat, still managed a smile though

the look on Samantha’s face dispels a pain free outlook

In short I think those plastic flimsy plasters lasted about 5 miles before evidently shuffling off leaving my nips to fend for themselves against the smooth feeling but probably 15000 grit sandpaper that is a running top, thank goodness it was red.

Now there is a certain part of the population of the UK whose thighs touch at the top.  I don’t know about you but I am one of those members, and for the sub half marathon runs its not much of a problem.  Moving on through the 13/14/16 milers and things became abrasive. 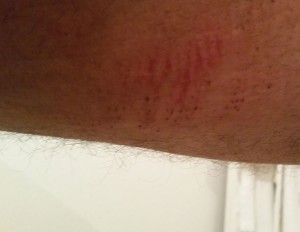 I have no idea, what to call this but i am thinking of waxing

What do you do when you are running around for miles upon miles?

I listen to podcasts.  The Chris Evans breakfast show best bits, some TED talks, Freakonomics, “Stuff to blow your mind” and a few oxford biographies.

Bit of an overused word, but now my knee ligaments are almost in a permanent state of stretch, I need to really use my rest days wisely so I can recover.  Having gone past the half marathon marker, its time to think about running optimisation.  One of the things I am trying is to get my foot speed up to around 180 steps per minute, this is not necessarily to go faster but to cause less damage because of the following:

Anyway its pretty much working for me, I find it brings effort and results closer together, like your cardio is more connected to the speed. All you need to do is lengthen your stride a bit to accelerate and its not just move your legs quicker.  For the shorter runs I have been listening to a clicktrack in order to get the leg speed up.  I am thinking I used to be around 160 steps per min and I am now in reality just over 170, it all helps.

unfortunately Payman developed a knee injury which has forced him out of the running, though he will be doing it next year with more time to prepare for the quite traumatic training.

Don’t forget I am running for a great cause…. the Sparks Children’s Charity, http://www.sparks.org.uk/about/  helping more money be invested into pioneering medical research for small children.  If you agree with this, and you are able, then donate here: http://uk.virginmoneygiving.com/RobertElbourn (dont forget Deutsche Bank are currently doubling all donations while under 1K), and if you weren’t quite moved enough by Dermot’s dancing in red nose day then maybe this will :-).

Rather than expect my friends and altruistic web wanderers to sit back and generously give without more than a (hopefully) entertaining story in return, I have teamed up with my Sister in Law Mellissa Whittle to host a Quiz Night, on the 18th April in Beckenham, they’ll be a post on this soon.  I will also start a competition of guessing my finish time in the marathon with a decent cash prize to be won, which will also pop out in the week. We have also had some amazing donations for the raffle and also a painting to auction so watch this place.   Also feel free to search Mell out and sponsor her here:  http://uk.virginmoneygiving.com/MellissaWhittle